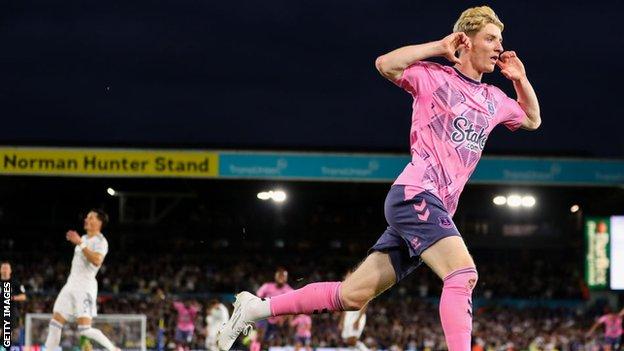 Lampard spoke about a deadline on Friday before the first of Gordon's two goals - in a 1-1 draw at Brentford. But after the Leeds result he said he was "very confident" Gordon would stay. Asked if he would now consider selling Gordon, the Everton manager added: "No, he's too important a player and I think he showed his worth in the last two games. "And with two days now to go [until the transfer window closes], what good would it do us to do anything with Anthony? On a bigger picture than that, he is our player who we've developed and there's an affiliation with him and the fans and vice versa. "Clearly, the interest has been there because he's a top player. And that's why we're so keen to keep him." Gordon's goal came before Luis Sinisterra's equaliser as Leeds ramped up the pressure in the second half. But Everton could have snatched the win late on when Amadou Onana and Nathan Patterson both had great chances. The visitors' new £15m signing Neal Maupay had to sit on the bench despite the French striker joining the club on Friday. Premier League rules meant that he had to be registered before midday on a working day before a match, with Monday being ruled out because it was a bank holiday. Lampard revealed he had prepared for the game at Leeds with Maupay in mind, only to learn of his omission on Monday morning. "It feels strange and disappointing. It denies us options in the game," Lampard said. "We signed him on Friday afternoon and because of bank holiday weekend, he's not allowed to play on a Tuesday night, it seems a long time. I wasn't aware of it until late, so we prepared the game with Neil in mind. And then that changed I didn't have that option. "I'm not telling the Premier League what to do because I'd probably be told off for saying that. But the reality is, who gets bank holidays anymore? I don't. "The Premier League is the best brand of football and the best league in the world. We signed a player four days ago. Whether it's a quirk of the rules, it will probably change now." Asked if he planned to add another striker, with Dominic Calvert-Lewin still injured, before the window closed, Lampard added: "We'll see. We are not desperate,